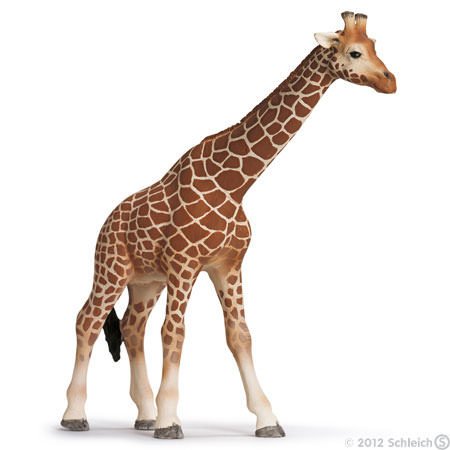 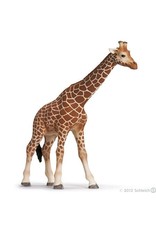 Giraffes are the tallest land mammals-- their babies can reach six feet tall when they're born! Each giraffe has a unique pattern of spots on its coat -- subspecies of Giraffe are, in fact, differentiated by color and pattern variations as well as by geographic range. Some Giraffes are recognized by their rounded or blotched spots -- some with star-like extensions on a light tan background, running down to the hooves. Despite the Giraffe's unusually long neck, it has the same number of vertebrae as humans -- only seven. Giraffes graze far and wide across the southern African bush and savannah, browsing the tops of trees for new shoots. Giraffes can go for two or three days without water, just like camels. They have several knobs, called ossicones, on their heads that are covered with fur. Giraffes sleep for only up to an hour at a time and can survive without sleep for an entire day. They spend most days just ambling around, but when they decide to run, they're fast and can reach up to thirty five miles per hour! Some Giraffes live in herds of up to fifteen, but the social structure constantly changes.